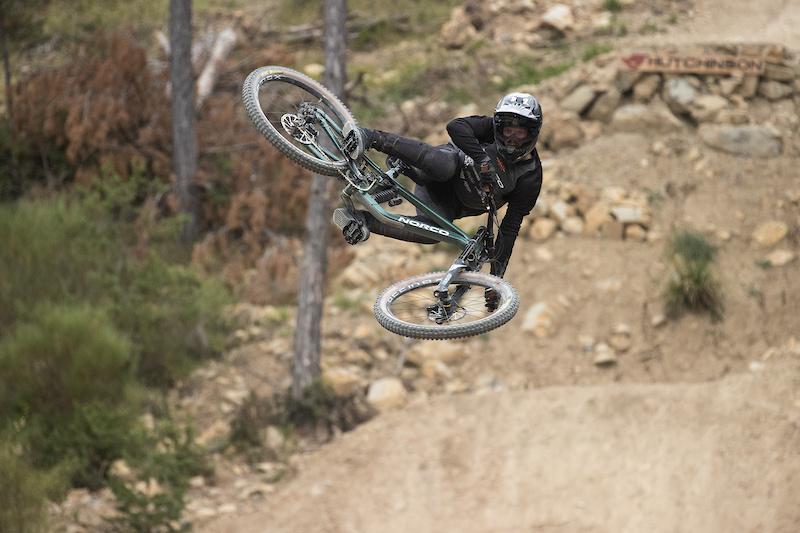 To bike afficionados delight, the EVO JAM is back in the game! The traditional EVO Bike Park jam was set up on the September the 4th in the Dignes les Bains mountains, South of France, and the show was fire! As every year, the best French and European riders met up for two days of riding with friends.

This year, the jam was set up according to the actual situation so everything was alright.
All the structure set up by the EVO crew, the sponsors and the volunteers allowed the riders and the public to enjoy the event with the best conditions

The show was set on the Griffus Line. The track was born in 2019 and it’s a big slope designed for the best riders with its 20 meters jumps where the riders can really show their skills.

One of the EVO shuttles was reserved for the riders to maintain a continuous show. Lot of smiles keeped all day long by the riders.

For the event, prices were prepared for the riders. William Robert was the winner of the « best whip » price with his incredible style on the slope biggest jump with his back wheel above his head.

About the « Best Tricks » price, the contest was intense between William, Elie Robert and Tim Berger. But finally it was Tim who won the price with a double backflip made on a DH that seemed so easy for him as you can see in the video.

Olivier Cuvet won the « Best Line » price with some big moves ; 36 drop, big backflips, some quality superman seat grab indian and a no hand landing which made everybody stand up.

A big bag of tricks for the french rider with an insane no-hand landing on the big mama.

Special mention for Gemma Corbera the Spanish rider. She was the only girl to ride all the bigger part of the slope and she send some bangers on the last double.

A big bag of tricks for the French rider with an insane no-hand landing on the big mama.

We will also notice that more and more young riders are taking part in the adventure as Raoul Schneeberger, 13 years old, who made the show riding the track on an enduro bike with style as their older friends Edgar Briole and Théo Mathieu.

As every jam which is worth it, people could buy excellent burgers and drinks to stay all day long and enjoy the show. The bike park partners had their stands set up next to the slope so people could meet them and buy their products.

The riders rode relentlessly all day long to the delight of the public. The trains often had more than 10 riders in a row. A true air-time festival.

Speaking of people, the spectators were a lot; there were around 2,000 people watching the show on the Griffus Line and the ambiance was lit as it was a worldwide championship. There was an other contest during the EVO JAM. The event also crowned its best supporters with a trophy and some passes. It was an opportunity to see the public fighting to defend the best riders and the most impressive actions.
All tools were allowed while staying away from the rider’s wheels.

The riders and their bikes.

It’s rare that a good bike event finish without a big party. The EVO Jam suited to the tradition with a PitBike race on the pumptrack organized by the Clever School and a show by Mister Thomas Lemoine aka Lil Moine with Tim Bringer for an anthology rap scene.

For 2022, a craziest event is on the starting block with a refreshed track and an other event aside from for the amateurs.

But for sure, from now now , the EVO Jam had become one of the unmissable gravity mtb events !!
See you for the next edition

The EVO Bike Park is a Bike Park situated in the South of France open during the 4 seasons.