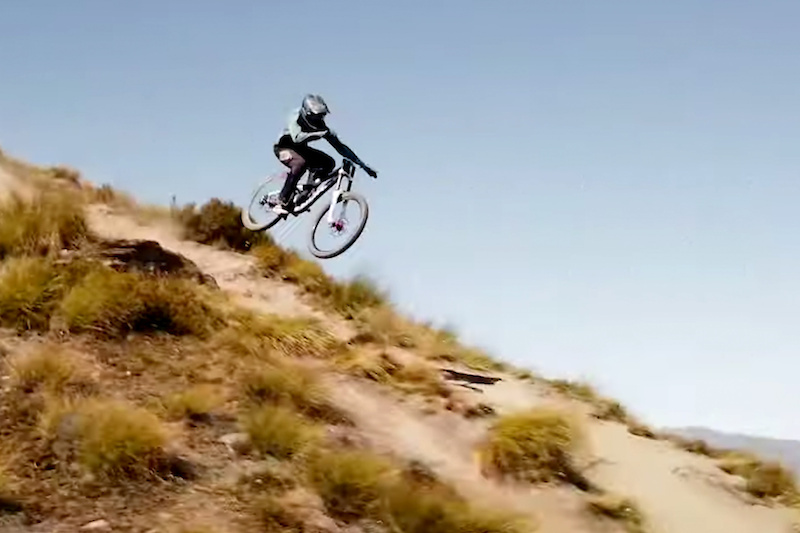 The hardest MTB edit I created in Evolve movie was easily this one.
Filmed on one of New Zealand’s most scenic trails this edit took 3 months to plan and shoot.
100% shot on cable cam from start to finish 100m at a time.

One day I rode this amazing track in Queenstown and absolutely loved it. It was so fun racing along the ridgelines with this incredible view next to you of Queenstown lakes and mountains. After riding the trail it was set in my mind instantly “I have to film a sick edit here “.

I had filmed a few edits already by this stage around the local Queenstown tracks and knew this one had to be special. I wanted to show the awesome scenic ridgelines you ride along and the flow of the track at the same time. So in my head, I was already thinking that it would have to be filmed on a drone to get high altitude angles to show the flow and scenery of this awesome trail.

After doing some research I concluded that filming on a drone in this area was an absolute nightmare. The trail was very close to Queenstown airport, in the direct flight path of tour helicopters and over council land which needed permission forms. I was so deep in this idea of filming this trail I dug deep into trying to find a way to film it uniquely.

One day an idea popped into my head of trying to film the high open landscape shots on a cable cam. At this time the idea seemed really far fetched I had so many problems that needed solving.
-How was cable cam points going to be secured?
-How high above the ground can I get the cable cam?
-Will the signal be strong enough to reach the camera on the other side of the line?
-How many riders should I have in the edit to be able to frame the shots perfectly?

After becoming obsessed with this idea I decided to walk the track again to see if I could come up with some solutions. I noticed that the trail had a lot of rolling hills surrounding it that potentially could give the cable cam the height it needed between the hills to create the high landscape shots I had in mind. I decided to try to source some warratahs or (metal pickets as some might call) them to hammer into the ground from hill to hill. Originally I didn’t know if this idea would work as I had only used the cable cam on trails with dense tree’s surrounding them so I would have a lot of anchor points.

I still remember the day I went up there again with the cable cam and the metal pickets to test the theory out. I remember being so nervous I wanted it to work out so badly I didn’t want all this planning to go to waste.

I hammered the picket into the first hill and then climbed over to the other hill on the other side of the trail and did the same thing.
I then set up the cable around both pickets at this time realising how much work is involved walking back and forth between both anchor points. I tensioned the wire and it seemed pretty stable so I set the cable cam unit up and put it on the wire and tested it out.

It worked like a F@#%en dream. I was stoked I was legit lying there laughing with happiness.

I took a sample clip of the trail and sent it to the riders to see what they thought. The riders were stoked too and we had a meeting about it that night. The cable cam was only going to be used for the high scenic shots of riding the ridgelines but at the end of our meeting we decided to do something crazy and make this edit as unique as possible and film the whole thing on the cable cam limiting our gear choice dramatically.

At this stage, I worked out to have 3 riders in the edit 2 guys one girl. The reason for this was to make it look like an awesome sort of party run or friends sending an afternoon lap together.

Unfortunately, the girl pulled out of the edit as she couldn’t get a set day off every week to film this so it was riders Ben Lang & Emerson Wilken that deiced to join me on this journey. In the end, we figured out it was a good thing that we only had 2 riders because the framing was a lot easier on 2 riders when shooting close up shots.

As we began the project we quickly realised how much effort this was going to be the cable was max 100 meters long so we had to work our way down the track 100m at a time. We also were very picky with our shots because we wanted them to be perfect so we reshot so many clips it was very rare to get the shot we wanted first go.

We finished the last shot and we instantly cracked a beer to celebrate, man that beer was one of the best I’ve had in my life. 3 months of hard work had come to an end and we couldn’t have been more stoked with the final project.

Thank you to the riders Emmerson Wilken and Ben Lang for making this happen. It is so important to have riders that share the same vision as you and are willing to get the shot no matter what it takes. This is how great edits are made.

This trail is called Rude Rock and is located on Coronet Peak In Queenstown.