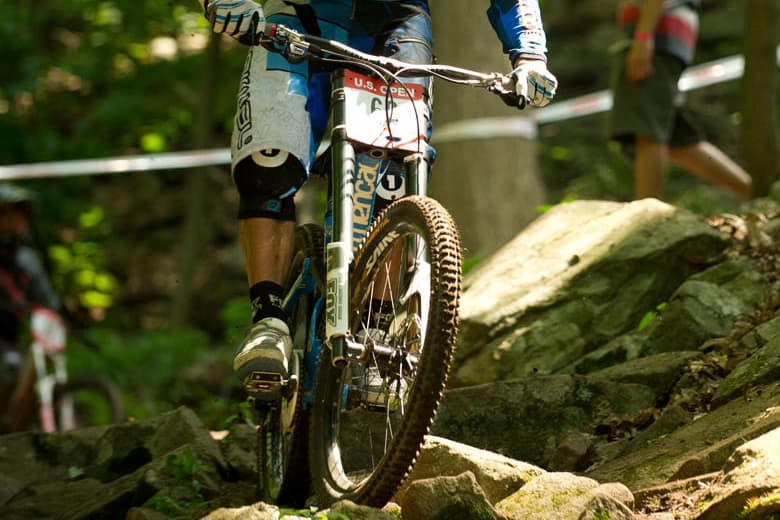 Along with bar-mounted lockouts and grip shift, inverted forks are one of those ideas that seems to keep coming back around in the mountain bike industry. Perhaps the most famous USD fork of all is the Manitou Dorado, which was updated a couple of weeks ago, but the design is also currently championed by Intend and RST.

While they will normally catch your eye on a mountain bike, the inverted design is the norm in the world of motocross. The touted advantages include less unsprung weight to allow the wheel to track the ground better, as well as far more fore/aft rigidity, however their Achilles’ heel in the mountain bike world has always been the torsional stiffness. The car park test of sticking the front wheel between your legs and twisting the bars can be off-putting regardless of its actual validity on the trail.

Regardless of their advantages and drawbacks, almost all suspension manufacturers have given the design a go. From the RockShox RS1 to the Bos’s burly Obsys, they have come from all corners for all uses. Today though we’re looking at one that never made it to market but definitely caused a stir, an unreleased prototype downhill fork from Fox.

This fork was first spotted on Gee Atherton’s Commencal in a practice run at the US Open in 2011 but it was also later tested by Aaron Gwin. The US Open was the first public viewing, but Fox had apparently been working on the design for a while and also had a number of prototypes that never made it to the public eye.

Digging into the details, the fork didn’t use the same 40mm diameter stanchion from Fox’s regular downhill fork. Instead, it used 36mm stanchions that that slid into massive 48mm upper tubes. A number of axle setups were investigated, presumably to try and increase the lateral stiffness, but in the end a standard 20mm axle setup was what Gee was riding in 2011. The only info we had on the internals was that it used the same FIT RC2 as the Fox 40 of the time. However, from the outside, the spring leg in particular looked to be something different with its preload dial at the bottom of the leg and a 5mm hex bolt at the top.

The fork never made it past the prototype stage and now simply exists as a curio in Fox’s in-house museum. Word is that both Gee and Aaron were big fans of how the prototype fork handled fast, rough sections of trail head on – thanks to the increased fore/aft stiffness of the inverted design – but felt that the standard right-side-up arrangement of the current Fox 40 had the inverted fork soundly beaten in the corners. Fox could potentially have fixed this by adding some more material, but the inverted fork was already significantly heavier than its counterpart so the project was shelved.

That’s not to say it was a waste of time though – Fox doesn’t look at this project as a failure, but rather an exploratory exercise to learn from. You may never be able to use one of these forks, but you may be currently riding suspension technology that owes some of its DNA to the fork pictured above.