Juliana released their Roubion in July of last year alongside the Santa Cruz Bronson. I was all lined up to head to Vermont and ride the new bike at Kingdom Trails in Vermont, but then I crashed in an enduro race in Kamloops, BC, the week before the launch event and broke both of my arms. I’d never broken any bones before, so I really went all in, smashing both distal radius bones and an ulna all in one shot. Needless to say, I did not head across the country to the launch event.

Pinkbike tech editors Mike Kazimer and Mike Levy had great things to say about the Santa Cruz Bronson at the Field Test last August, so when I had recovered from my injury, I called up Katie Zaffke at Juliana and told her I was ready to redeem myself with the Roubion. I knew it would be a good fit for Squamish and had a feeling it would be a great bike to help me get my confidence back on the trails.

I spent several months on the Juliana Roubion and the no-compromise build is ready for rowdy trail riding right out of the box. I likely wouldn’t have changed a thing on it, except that with Mike Levy’s Giant atrocity, Mike Kazimer’s Ransom Foxzocchi, and Daniel Sapp’s Carolina Edition Yeti you’ve come to expect a bit more than a stock bike from the Pinkbike Staff Rides, haven’t you?

What’s different from the Bronson? The Roubion comes with a light rebound tune, vs the Bronson’s medium, a women’s saddle, a 760 bar vs 800 on Bronson, Juliana grips, and a unique paint job.

The Juliana Roubion uses the new suspension layout found on the 170mm Strega, in addition to a host of other geometry changes to make it even more capable than the previous generation. I think the term ‘confidence-inspiring’ is vastly overused by companies, especially when marketing their women’s product, but I definitely feel like this bike really does make me more confident on all terrain so I’m comfortable using that cliché to describe the Roubion.

There are several steep slabs in Squamish’s Alice Lake area that I hadn’t even worked up to before breaking my wrists, but within a relatively short period of time riding the Juliana I was able to conquer two of them. The Roubion is plush on big compressions and bumpy runouts, but not in a way that makes you feel like a passenger. Always playful, the Roubion is easy to maneuver and handle and it feels like it just wants to flick about and dance down the trail.

On the climbs, the Roubion is efficient and doesn’t bob at all under power, but still has great traction and is easy to wind up tight switchbacks. I never found myself reaching for the climb switch on the shock unless I was headed up a long stretch of pavement.

All in all, it really is the perfect bike for the combination of long climbs and technical descents in Squamish. The only downside I can see with the new suspension layout is that the position of the shock makes it difficult to clean and to measure and set your sag.

Compare to other All Mountain/Enduro/XC

It’s Always All About Wheelsize

This year, several of the top enduro and DH racers are riding a mullet bike, so of course, I wanted to give it a go too. Last year my personal bike was a Norco Range 29er and so I’ve spent a good chunk of time on the bigger wheels. I really enjoyed them on rough tracks and at high speeds, but on big compressions, after a few mishaps, I was always worried about getting in the way of the rear wheel. Once I hopped on the Juliana Roubion, I remembered what I love about cornering on 27.5″-wheeled bikes. Could the mullet be the best of both worlds?

With a 29er DT Swiss F535 fork appearing while my partner was on a business trip to the Yukon and his 29er Ibis Ripmo was idle at home, I decided to find out.

The Gehrig twins have been racing on this fork in the Enduro World Series for a couple of years now, but it’s only just available in North America now. It’s a distinctive looking fork with obvious attention to details including covered dials and an integrated mudguard. DT Swiss wants you to be able to set and forget the settings, so they’ve actually hidden the access to the dials and air spring with little plastic covers. You can add air to the fork by removing the caps using the T10 Torx wrench that is hidden in the axle. It’s also what you use to adjust the compression and the rebound.

Dan Roberts wrote a full review on the DT Swiss F535 One fork, which you can read here. There’s an easy to use setup guide on the DT Swiss website, and based on that and my 155lb riding weight, I’m riding 67 psi in the fork, with 16 clicks of rebound and the compression damping fully open.

I wrote a First Look for this saddle in November, and I’ve been riding it ever since. Power saddles have shorter noses than traditional saddles, which means they get out of your way when you’re riding. I’m riding the widest saddle Specialized offers, 168mm, in the super subtle “Acid Lava” colour, and never have any trouble with it getting in my way when I’m riding.

I can honestly say it is one of the most comfortable saddles I have ever ridden and I’ve recommended it to several of my friends who have complained of saddle pain. The concept behind the Mimic technology is that the saddle accounts for the changes in the density of female soft tissue and adapts to them. The design of the new saddle mimics the body’s response to different types of pressure to create equilibrium within soft tissue. No pressure points, no pain!

Before you go out and purchase it for yourself, make sure that you get your sit bones measured. Saddle fit is complicated, and many people are riding saddles that are simply the wrong width.

Something I was really excited to get my hands on was the new OneUp handlebar and stem. The Squamish brand’s goal with the oval-shaped bar was to combine the best ride characteristics of 31.8mm in a 35mm bar. Coming back from breaking two wrists, who doesn’t want to try a more vertically compliant handlebar? I’ve cut the bar down to my preferred 760mm and added purple decals.

The new stem is basically a completely new way of preloading a headset so that you can run their EDC tool without needing to tap the steer tube. The stem has a numbered system on the side of it so that you know which order to tighten the bolts in and how much to torque it. I’d been riding the EDC tool in the pump until I got the stem, but this is the best of all worlds since I can now carry a CO2 in the pump, and the EDC tool in my steer tube. There are seven different options for the top cap colour.

I knew I liked the OneUp dropper from my experience with it on the Canyon Spectral, so I got it to ride on the Roubion as well. I was hoping to fit a 170mm dropper on there, but couldn’t quite squeeze it in with the low style shock on the Juliana, so I went with the 150mm option, which is still a great amount of drop for a Medium sized frame.

The FSA Powerbox power meter uses a power2max system with FSA’s carbon crank arms. The same system is used on several other brands’ power meters. The 30mm alloy spindle fits every mountain bike frame, but you do have to get the bottom bracket separately. You’ll also need a device that is ANT+ / Bluetooth compatible in order to know what your watts are when you’re riding.

I’d only ever trained with power inside before and it’s a completely different game outside. I may feel like a professional athlete with my carbon cranks and watts spiking on my Garmin, but training with specific power numbers outdoors is a lot more difficult than you would think. It’s hard not to spike your watts like crazy when you want to make it up a technical climb, so I can see why so many mountain bikers spend easy days on the road bike.

The Code RSC brakes came on the Juliana Roubion, but I would just like to emphasize how much I appreciate the power and modulation they have. Riding the steep rock rolls that Squamish is known for is a lot easier when you have dependable and trustworthy braking.

I also am a big fan of the adjustability of the levers on the RSC model since I’ve struggled a lot with grip strength in the past months as I came back from injury. I’ve been riding with the levers as close to the bar as possible since my hands feel like they are in a stronger position when they are more tightly closed on the bar and I get less arm pump, while still feeling the bite of the pad on the rotor.

It’s worth noting that there is a full-sized water bottle on a size medium 150mm travel bike. Mine is a particularly gorgeous Specialized Purist bottle that matches the Roubion perfectly. The Specialized Zee Cage II is one of the best cages out there, especially for mountain bike frames. I’ve never had one break or lost a bottle, and it gives you an extra bit of space to maneuver when trying to get your bottle in and out of the frame. You can also get it left or right loading, depending on whether you’re left or right-handed.

The wrap on my top tube is actually a set of tire levers and a tube that are sold to go in the Specialized SWAT box, but obviously not all bikes have a SWAT box to put it in so I’ve strapped it to the Roubion top tube with a ski strap. I like not having to think about what I’m carrying with me and whether it’s enough to fix a flat and with this set-up, I’m pretty much self-sufficient on the trail whenever I pull my bike off the rack.

The DT Swiss fork combined with the 29er Ibis front wheel and Santa Cruz Reserve 27.5″ rear wheel may have given me the trendiest bike of the year, but I’m going to go back to riding the bike in its original 27.5″ configuration.

Yes, my partner wants his wheel back, but also, despite the fact that I slammed the stem, the front end rides a bit too high on the mullet bike for my liking. As a result, it doesn’t corner as well as it does in its stock setup. The handling is just so sharp and nimble in the 27.5″ configuration that it feels like the bigger wheel wallows in comparison.

On the steep and rough stuff the wheel did smooth out the bomb holes and I felt a slight reduction in roughness, but it wasn’t as drastic as I’d expected, despite the head angle being a degree slacker. 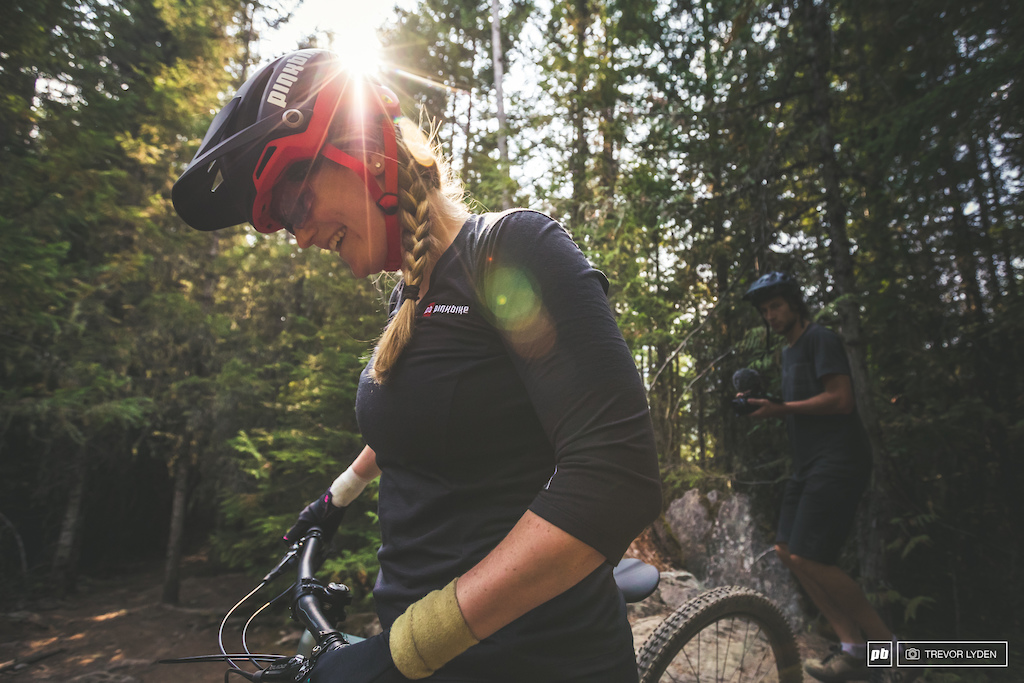 That being said, I felt like the disadvantages of the cornering on flat flowy stuff outweigh any of the advantages I felt on the steeps. The bike is so well balanced in its original form that I’d only recommend tinkering if you happen to have a 29er fork and a spare 29er wheel lying around.https://www.pinkbike.com/news/staff-rides-sarah-moores-juliana-roubion-mullet-bike.html?trk=rss