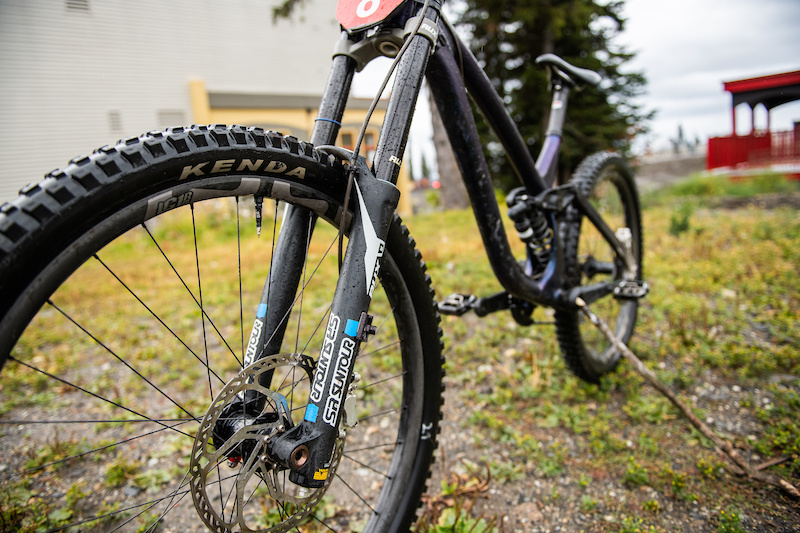 UR Team’s Joe Breeden has just won the MT7 Psychosis race aboard new prototype tires from Kenda. So, what are they? And how are they different to Kenda’s current offerings?

The new tire looks like a mix of two current models – the Pinner Pro and the Hellkat.

The tire alternates between two and three centre blocks. The tread looks relatively open and it seems to borrow heavily from the Hellkat. Infact, if you removed the first row in the 2-2-3 repeating tread pattern of the Hellkat you may well get something very similar.

Here we can see the Hellkat on the left and the Pinner Pro on the right.

The siped edge knobs look to be uniform around the whole of the tire. Tire’s knobs and are often siped because it makes them more flexible and able to twist and conform to dirt better without heavily compromising the stability of the lug at the base. This is particularly important when loading the bike through turns and the rider demands both grip and support. These square blocks look slightly different from the L-shaped side knobs that appear in Hellkats tread on a one-in-three basis.

The prototype tire on the left, featuring the offset pattern, compared to the Pinner Pro on the right.

You can also see that the centre and edge knobs are entirely offset from one another. This is different from Pinner Pro, which has a design that features rows of lugs, and the Hellkat, which has semi-offset lugs. The benefit of aligned edge and centre knobs can be increased traction when both driving and braking forces run through the tire. However, it can leave the rim or tire vulnerable to damage as if you are unfortunate and hit a square edge on the wrong part of the tire it has nothing but canvas and the air pressure to protect the rim. Both of these things can be overwhelmed by high speed impacts on sharp edges.

According to a recent bike check video with Joe, the release of the tire will be in the relatively near future.