Social Round Up: XC Athletes Arrive in Tokyo for the Olympics 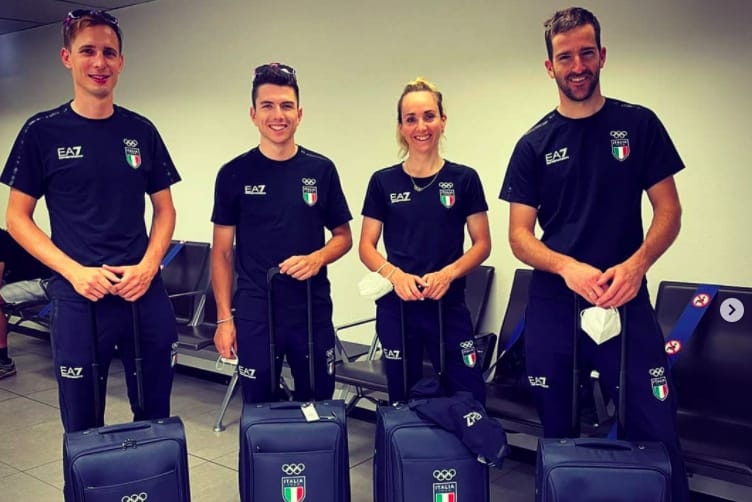 A glimpse at the team kits and custom bikes in the final days before the Tokyo Olympics.

Loana Lecomte
There’s no doubt that Loana is the favourite coming into these Games with four World Cup XCO wins to her name this season.

Nino Schurter
Road gaps and skids for the 2016 Olympic champion in his final build up to Tokyo.
Kate Courtney
A brand new Scott Spark in a special Supersonic colorway for Tokyo for Kate Courtney. She’ll be competing in a matching teal Scott helmet instead of her usual Red Bull helmet.
Pauline Ferrand Prevot
One last MTB training session at home for Pauline.
Victor Koretzky
A peek at Team France’s cycling kit for the Olympic Games.
Jordan Sarrou
Jordan Sarrou is another athlete practicing road gaps ahead of the technical Tokyo course.
Rebecca McConnell
Rebecca McConnell is keeping the rhythm as close to normal as possible to a regular race weekend, minus the not-eating-for-almost-12-hours-on-the-travel-day part.
Laura Stigger
Laura Stigger in her Team Austria colours.
Henrique Avancini
Henrique Avancini skipped the last two World Cups to focus on preparing entirely for Tokyo. We’ll see if it paid off in a week’s time.
Catharine Pendrel
Catharine Pendrel will be headed to the Games without six month old Dara.
Malene Degn
Malene Degn ready to travel in her Team Denmark apparel.
Eva Lechner
Eva Lechner with Luca Braidot, Nadir Colledani and Gerhard Kerschbaumer in the Italian colours.
Anne Tauber
The Netherlands will be represented by two women (Anne Tauber and Anne Terpstra) and two men (Milan Vader and Mathieu van der Poel).
Anne Terpstra
All orange for Anne Terpstra and her Ghost Lector FS.
Haley Smith
Gold maple leaves for Canada’s Haley Smith.
Alan Hatherly
Cannondale teammates Alan Hatherly and Manuel Fumic prepare to represent South Africa and Germany.
Mathias Fluekiger
Mathias Fluekiger has had an excellent season so far with two perfect weekends in a row at round 3 and 4 of the World Cup. Will he be able to fend off Tom Pidcock and Mathieu van der Poel on the mountain bike?
Jolanda Neff
From injury, back to the podium, to injury again. We can’t wait to see what one of the toughest competitors in the field brings to Tokyo.
Sina Frei
Sina Frei is ready for take off with the strong Swiss team.
Evie Richards
Evie Richards will be competing on Team GB alongside Tom Pidcock.
Haley Batten
An incredible first half of the season has us wondering what Haley Batten can do in Tokyo.
Christopher Blevins
Representing the USA in the men’s race will be Christopher Blevins. https://www.pinkbike.com/news/social-round-up-xc-athletes-arrive-in-tokyo-for-the-olympics.html?trk=rss

« Smith & Koroyd Sue Burton For Use of WaveCel in Helmets
Round Up: Women’s MTB Wednesdays – Issue 1 »