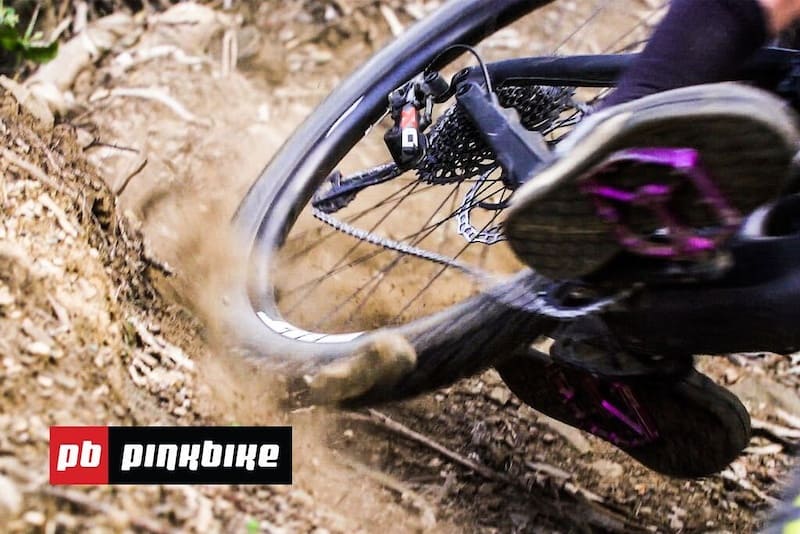 The Rimpact Pro uses two densities of foam. There is the larger, softer arear that sits against the rim and the harder compound strip on top.

The Rimpact Pro is a malleable, dual density, wedge shaped insert that only comes in pairs. You can get sets that mix the Pro with the Original, which only uses one density, or sets that include a 29″ as well as a 27.5″ insert. Because the insert sits on the well of the rim, a trait shared with the CushCore, special insert valves are needed and are included in the box.

From the first run on the Rimpact and its qualities were very apparent. It’s far more of a platform and significantly firmer than some of the other inserts on test. After a few runs, I let down the pressure to 18/21psi. It was so much firmer that it had a noticeable effect on how I weighted the bike. Initially, I didn’t have as much spring in the tire so my weight fore/aft was off when riding drops. This is something you get used to very quickly, but the way you preload the tire seems to be a little different.

It feels like far more of a system. It’s not something to be used with your normal pressures but rather in conjunction with the lower pressures enabled by running the insert. The grip was fantastic. The firmer feeling is not dissimilar to running a heavier compression tune. It thudded through everything it came across and it felt amazing. It rewards you the more you push and I consider it to be a performance product aimed at people who don’t merely want to protect their rims from occasional impacts, but rather people who need inserts to enable them to run lower pressures without them immediately breaking wheels.

I found that the Rimpact could be fatiguing at times. It doesn’t feel that comfortable, in that you often feel like you ride on the support of the material as opposed to solely on the tire supported by a chamber of air. It offers huge amounts of grip, but to say that there isn’t a trade off in terms of comfort wouldn’t be true. I also tend to run a very firm spring rate, which could have exacerbated this issue to some extent. I would, however, be very curious to try the Rimpact with a slightly lighter compression tune on my fork.

I eventually went down as low as 17/19psi on a particularly wet day. The grip of the Rimpact is genuinely quite fantastic. Getting onto high lines over off camber roots is very impressive and there is a tangible gain to be had. Going down to such low pressures felt very bizarre and I was certainly a little skeptical. However, the Rimpact supports the tire in such a way that it delivers enormous grip and a great platform in turns. Once you hit something, instead of your wheel deflecting off, it tends to “stay hit”. I would liken this to the use of a shot-hammer.

When riding turns without inserts, should you run lower pressures, the tire can almost be left behind as it finds grip, and the rim moves laterally across it. The Rimpact’s support means that although you can get the grip of the low pressure, it’s supportive enough that it can really carve turns and stops the rim running amuck under lateral load.

Through compressions, it took some massive clangs. When striking the wheel against rocks, the noise that came out definitely let itself be known. Although the Rimpact offered a huge amount of support it wasn’t as quiet as I would have liked. It was hard to say if this was the insert slapping against the rim or perhaps the wheel itself transmitting the sound. Either way, I did notice it.

It’s definitely more fatiguing than other inserts but that could also be something to do with the grip – it wills you to hit things harder. To get the most out of the Rimpact you have to crack on to go into the stroke of the insert. And if you do so you will be duly rewarded. If the Tannus is a parachute then this is more like a bungy jump – the freefall is minimal and, much like the chord of elastic taking up the tension, the insert duly picks up the load from a relatively early stage.

« Video: Bienvenido Aguado Lands 100ft Frontflip at Darkfest
Throwback Thursday: How Much Has Geometry Changed in the Past 10 Years? »