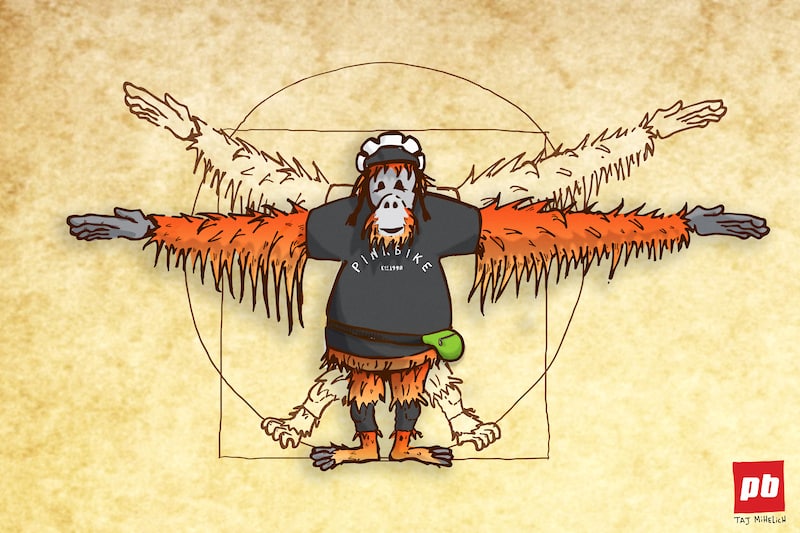 I’ve seen a lot of comments in articles about geometry, bar width and bar height referring to ape index. This is the ratio of your armspan to height, which is typically around one:one. Leonardo da Vinci’s Vetruvian man famously depicts an “ideal” human body having the same armspan and height.

Ape Index is often discussed in other sports such as rock climbing and boxing, where longer arms are usually considered an advantage. It’s relevant to mountain biking too because – for example – if you have a particularly high ape index (meaning long arms for your height), you may prefer a longer reach, lower bar height and wider handlebar than a rider of the same height with smaller arms, or visa-versa.

Ape index is sometimes described in absolute terms, as in armspan minus height. But this isn’t ideal because people often don’t specify whether they’re working in centimetres or inches, and because having an armspan 5cm greater than height is a bigger deal for a short person than a taller person because it’s a bigger percentage difference.

So for this poll, measure your ape index as a ratio, by dividing your armspan (from the tip of one middle finger to the other at full stretch) by your height. You can use centimetres or inches, as long as it’s the same for both measurements. You don’t lose points for using a calculator.

Obviously there’s existing data on average values for ape index, but I’m keen to see what the range of ape indices are among mountain bikers.

The data will feed directly into designs for the Grim Doughnut 3.0.