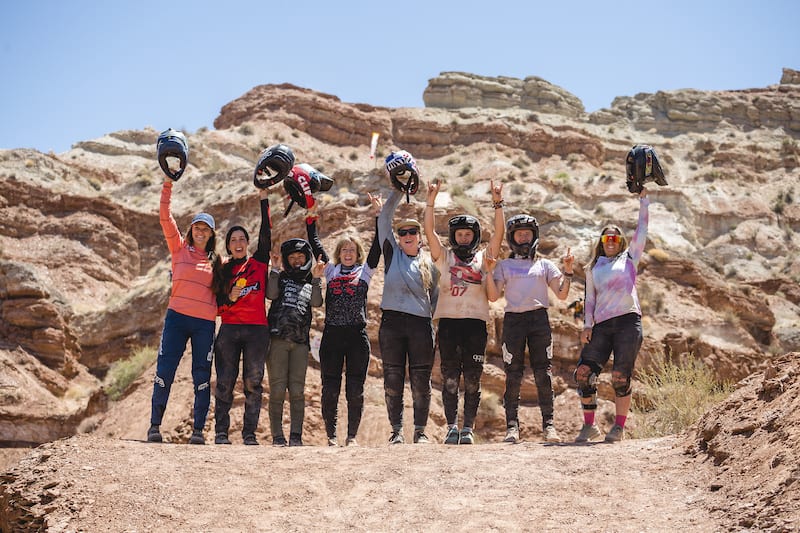 Hannah Bergemann pioneered The Ovary to the Fallopian Tube, which is no joke. Vaea Verbeeck stomped her technical double drop. Chelsea Kimball built and rode a brand new drop to canyon gap. Cami Nogueira also built a brand new technical roll to drop, and even after hitting the dirt hard on the first try and pushing through another couple of wild attempts, she repeatedly picked herself up and tried again until she nailed it. She’s tough as nails. Jess Blewett sent huge jumps with arguably more style and amplitude than anyone. Vinny Armstrong was the first to trick the step-up in the first riding session. Casey Brown rode the gnarly Fallopian Tube line, and then, even though it would have been completely reasonable to call it a day after that burly accomplishment, she hiked back up with Sam to support Sam’s first attempt at the line, dropping in to demonstrate with even more speed and finesse than the first time. Sam Soriano sent the big double drop at the bottom bigger than anyone else and set the standard for steadfast bravery every time she stood and looked at a line, admitted she was scared, and dropped in powerfully regardless.

Each women’s mountain bike event like this one chips away at the barriers for women that have cemented in the sport over the last few decades, but this one did more than just chip away. Though we don’t have official records for this type of thing, it’s safe to say that Red Bull Formation 2021 included several of the gnarliest female freeride accomplishments… ever. This is a huge step forward.

The Ovary rock roll to the Fallopian Tube was a crux move on the upper mountain. Re Wikstrom / Red Bull

Gotta go up to come down. Catherine Aeppel / Red Bull

All the Formation ladies are remarkable riders, whether on the ground or in the air. Re Wikstrom / Red Bull

A send and a celebration. Re Wikstrom / Red Bull

Hannah Bergemann sent it all the way down. Catherine Aeppel / Red Bull

Casey Brown was a valuable mentor for all the ladies throughout the week. Re Wikstrom / Red Bull

At the end of the week, riders voted on the rider they thought most embodied the Red Bull Formation values of collaboration and progression. Catherine Aeppel / Red Bull

To call it a successful week would be an understatement. Women’s freeride keeps picking up momentum, and after seeing what went down in the last week, we can’t wait to see what happens next.