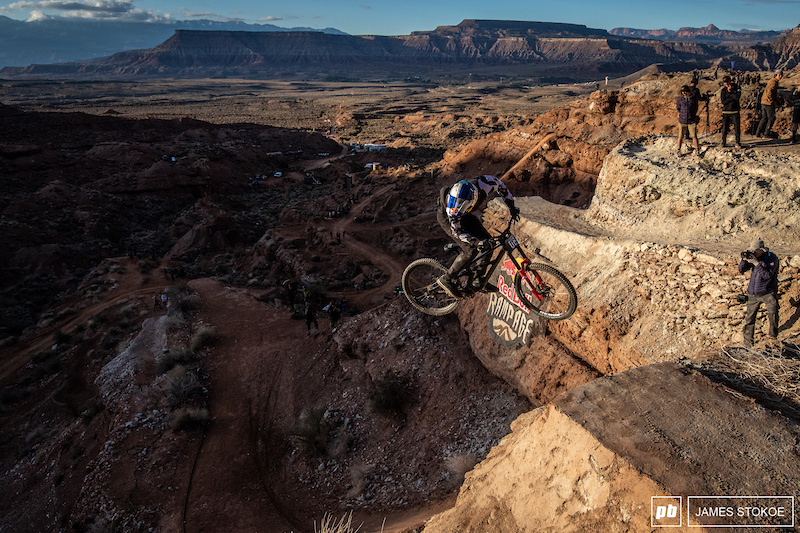 With finals just a day away now, Wednesday was a busy one on the mountain. Winds were light for most of the day, and the majority of the riders were out on their bikes at some point, ticking off features left, right and centre on the many lines that criss-cross the mountain. Brandon Semenuk put his single-crown fork to good use kicking the day off with a tail whip on a massive drop on his line, while Reed Boggs got up to the top of the mountain to hit the entrance to his line, and Brage Vestavik put wheels to dirt for the first time.

Riding stopped and there was an official course hold for over an hour mid-afternoon after an incident on the mountain where a media member on a quad rolled off a cliff into a canyon. An hour after the incident took place, the individual was transferred to an air ambulance. Red Bull held a media briefing after the event and while they were unable to confirm the driver’s injuries at this time, they told us that the individual was taken to hospital and that the organization does have three helicopter landing sites on the venue and a long line available if necessary, despite not having used it today. Many riders, especially those that were nearby when the incident took place, were quite shaken, but after a rider meeting, everyone decided to continue on with building and practicing with finals day looming.

As the sun got lower in the sky and time was running out before the end of the second to last practice day, Szymon Godziek and Tyler McCaul hit their big drop. Kyle Strait and Reed Boggs also stomped their respective drops and Kurt Sorge checked off a couple massive jumps above his last main drop. There are still some hits that remain for tomorrow, before riders tie together their runs from top to bottom and figure out how to best impress the judges on finals day.