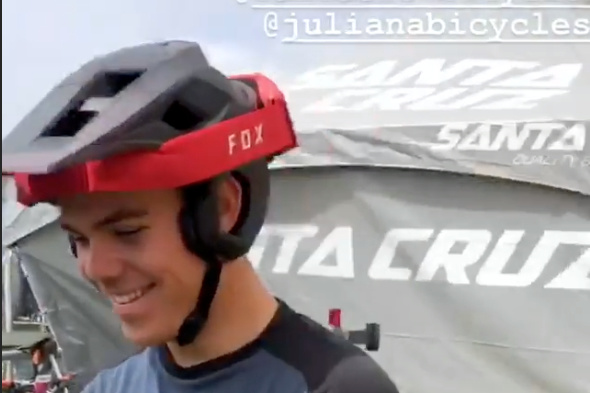 Following on from the new Fox Rampage Pro Carbon that was first spotted at Crankworx Rotorua, we’ve just seen another new helmet from Fox pop up at Sea Otter.

This time it was Nic Bean, who races in the under 21 category at the EWS, who was spotted in the lid in the Sea Otter Enduro. A bit of digging found the Instagram Stories of Brittany Phelan, Olympic skier and rider for Juliana, who also revealed a side of of Nic in the helmet:

But then we went on the Fox website and it looks like the helmet has actually been released right under our noses. It’s listed as the Dropframe and is described as a maximum coverage trail helmet but, despite appearances, it doesn’t have a removable chin guard. Instead it looks to be an open face helmet with some added ear coverage.

It has 8 big bore intake vents and 7 exhaust vents keep you cool and aid with moisture management, while the fixed visor is positioned to channel air through the helmet. We don’t know the weight but as it seems to be a slimline Proframe, we’re guessing it will be pretty low.