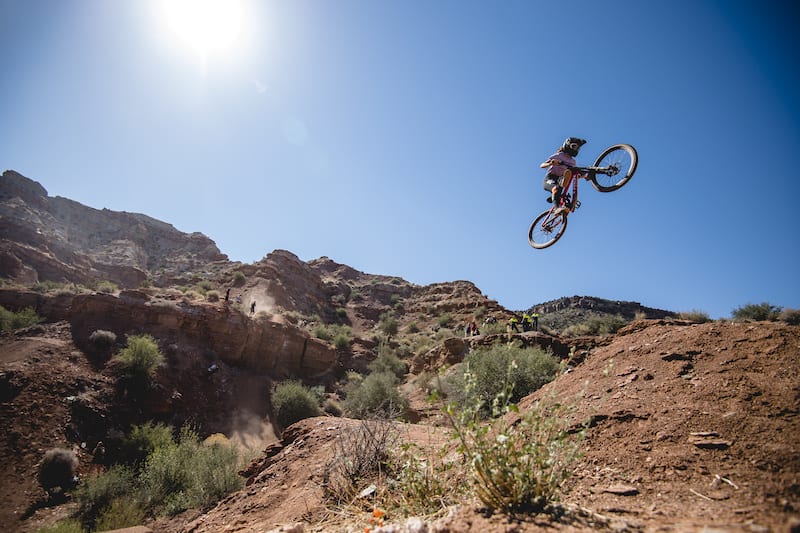 Once most of the riders wrapped up their builds, the first riding session began. Over three days, riders visualized and brought to life their lines. Now, it’s time for a different kind of hard work.
The first session was big, and it was just a warm-up. Be sure to stay tuned for more. Today featured lots of testing and fine-tuning features as riders figured out what works for them and what could use some improvement. Shovels were back on the dirt after the initial hits, but not before Re Wikstrom and Catherine Aeppel snagged some photos of the riders in the air. We’ll have more photos for you soon, but in the meantime, here’s a collection of shots from the first ride session at the end of the dig days.

In the background, you can see a technical drop that Vaea has been working on. Photos to come. Catherine Aeppel / Red Bull

As the day progressed, the girls kept going bigger. After getting a first tow from Carson, Cami towed Vaea into a massive sender. Re Wikstrom / Red Bull

While most were riding, Chelsea’s group continued digging. First to finish her big drop, then to build a canyon gap because they finished the drop earlier than expected. Chelsea currently has a knee injury and has been hobbling around with the help of a knee brace and sometimes a big stick, but she has been hitting big drops and jumps regardless. She’s a trooper.
The drop and canyon gap haven’t been hit yet, but riders have been checking off features one by one. Every single one of the riders did something big today. We’ll update you on what happens next. https://www.pinkbike.com/news/more-first-hits-at-red-bull-formation-2021.html?trk=rss