Mondraker tells us that the F-Podium project began back in 2015 with a design goal to make the world’s best XC race bike – end of story. That animal, however, turned out to be a moving target.

The F-Podium certainly looks the part, especially the top-drawer RR SL model, which features a lighter, higher strength carbon layup and is outfitted with Sram XX1 Eagle AXS electronic remote shifting, six-spoke carbon wheels by Bike Ahead, and an array of boutique cockpit components that would rival any one-off custom build. The RR SL is said to weigh only 21 pounds (9.53kg).

Graphically, it strikes a clean profile, with the front triangle and rear stays blended together by intersecting lines that help mask the the existence of its suspension. What can’t be hidden, however, is Mondraker’s Forward Geometry. With its massive reach, comparatively short stem and visually slack head tube angle, the F-Podium looks like a wolf in sheep’s clothing when compared to contemporary World Cup race bikes.

Mondraker’s press release empties the Oxford thesaurus of adjectives in an effort to underscore the F-Podium’s technology and to convey their belief that it represents the quintessential World Cup cross-country race bike.

The short version is: assuming that the UCI continues to encourage technically demanding World Cup XCO venues, a dual-suspension bike with more stable handling characteristics will produce faster lap times than a lighter weight hardtail (as has been the case in every timed comparison).

The bottom line is that you can still win challenging World Cups on a hardtail, but you’ll have to work harder to make it happen. Dual-suspension has been more widely accepted in the men’s division, probably because the advantages are more easily measured. The parity of bike-handling skills and physical ability goes much deeper into the men’s field than it does in the women’s.

“…the refined and truly unique Stealth Air Carbon structure used in the F-Podium features latest technologies that have never been used in a mountain bike to date. Here the finest selection of carbon fibers, a revolutionary laminate design and market leading manufacturing technologies blend into one of the lightest full suspension XCO Racing frames in the market – without sacrificing even one shred of strength or durability.

Combined with the likewise optimized Mondraker key technologies Zero Suspension and Forward Geometry the F-Podium is an XCO Racing bike like no other. A bike that wins over with the complete absence of the usual compromises. F-Podium will surprise you with an exquisite handling and unbeatable downhill capability combined with a superb suppleness and overall absorption.

At one time, Nino Schurter could leverage his superior skills to win regardless of what wheel size or suspension he was using. Today, he chooses his bike more carefully, because he must fight with ten competitors who can match his talent. Seconds count.

Will World Cup XC racing continue to be technically challenging? Mondraker gambled three years of expensive development that it would. If that holds true, their claim that the F-Podium is the ultimate XC racing bike may well prove itself. Let’s have a look at the future.

Mondraker says that they employed a German firm that was “a world market leader in automotive and aerospace carbon,” to assist them in developing the F-Podium chassis. They name their method, “Stealth Air Technology” and the carbon construction extends to the upper rocker link. Reportedly, their World Cup team has been racing prototypes for the better part of two seasons – plenty of time to tweak the layup schedules and frame geometry to get it right.

Two versions of the frame will be available: As mentioned, the elite-level RR SL model receives a special chassis, using a more laborious layup-schedule and expensive maximum-strength materials. The second has a slightly less expensive frame that is shared among three models: F-Podium, F-Podium R, and the F-Podium RR. Sizes available are small, medium, large and X-large in all four models.

Mondraker did not sacrifice functionality in their quest to make the lightest possible frame. Generously sized sealed bearings at the suspension pivots ensure your investment will make it through a few seasons. They tucked the post-mount rear brake inside the rear triangle out of harm’s way and future proofed the seat tube with a 31.6mm diameter, which fits conventional dropper posts (along with internal routing). Its molded chainstay protector is also designed to silence the drivetrain.

One thing you won’t find is a provision for a front derailleur. All F-Podiums are optimized for 12-speed, one-by transmissions. Both SRAM Eagle and Shimano XTR are supported and they will accommodate mechanical or electronic groups.

Mondraker calls it “Zero Suspension System.” This dual-link design is configured to remain ultra firm and stable until the suspension receives a significant impact, after which, it releases to follow the terrain. The compromise is said to maximize pedaling efficiency specifically for XC racing. Fox’s handlebar-remote lockout system is connected to the 32 Step Cast fork and DPS2 shock for those moments where near-lockout is preferred.

As mentioned, the shock is driven by the carbon upper link, through a tunnel in the seat tube, where it pivots on the lower link. This is said to assist in controlling the shock rate as well as to minimize stress on the chassis. With only 100 millimeters of wheel travel on each end, the rider is going to be moving through those rate changes in a hurry, so the curves are not going to be subtle.

Leaning on a decade of rider-forward geometry, Mondraker injected as much of “long-low and slack” as they believed would be accepted by the sport’s most reluctant-to-change competition. The stand-out numbers are the F-Podium’s 68-degree head angle, which has been livened up with a 44-millimeter fork offset. The seat tube angle works out to a steep, 76.5 degrees at ride height, although its actual measurement is 72-degrees. To ensure balanced handling, the chainstays are set at 432 millimeters and the 325 mm high bottom bracket works out to a 40mm drop. The big news is the bike’s reach, which starts at 440 millimeters for the size small and tops at 500 millimeters for the X-large size. To balance those big reaches, Mondraker spec’s tiny-for-cross-country-racing stems as short as 50 millimeters. That may irk some competitors, many of whom prefer a radically inverted handlebar position that requires extensions at or beyond 100 millimeters. 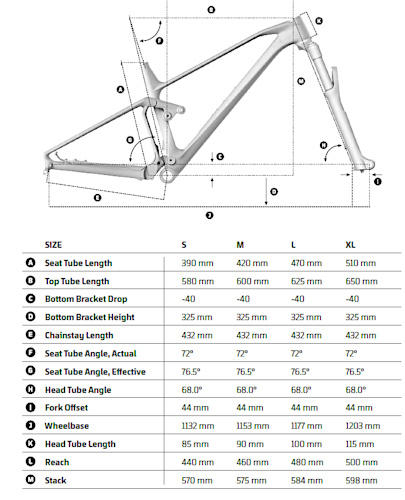