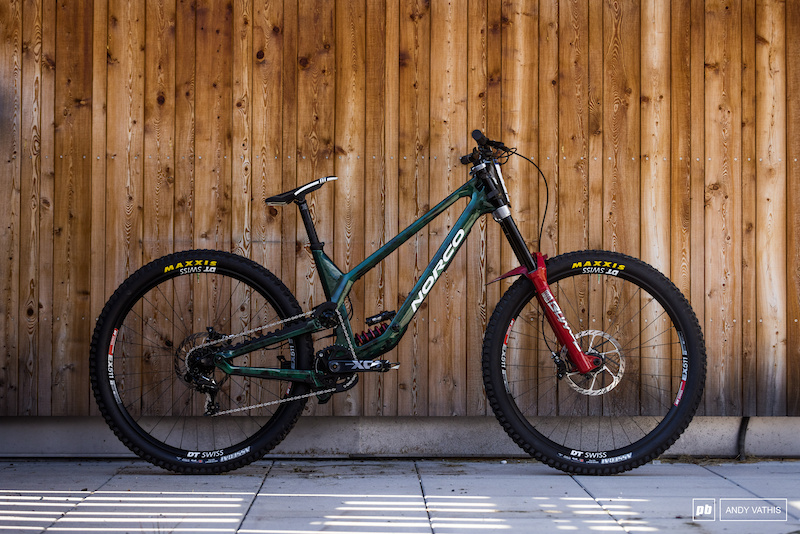 The Norco Factory Team has been testing a new downhill bike this season, and we finally get to take a look.

It looks a whole lot like the new Range, doesn’t it? Well, this downhill bike, which as far as we know is unnamed, uses the same carbon frame parts as the recently revealed Range, but uses a different shock link and dropouts to change the geometry, allowing riders to run a full-travel dual crown fork while keeping the bottom bracket height where it needs to be, making it an entirely different bike that’s ready to take on World Cup downhill courses.

Sam Blenkinsop has had a big year. He snuck into the top 20 at Les Gets and Crankworx Innsbruck, raced some EWS, and spent some time at home in New Zealand for the birth of his son. Congrats, Sam! Now, he’s back over in Europe for some more downhill racing.

Let’s take a look at his downhill rig.

Like the Range, this DH bike uses a high virtual pivot design with an idler pulley to keep things in check.

RockShox red to keep things smooth. They’ve lowered his fork pressure by 3 psi for Lenzerheide compared with Val di Sole to try to manage the chatter on this track. Rebound is fast front and rear, and compression will be dialed in over the next several practice laps as the course changes.

The lower link rotates around the bottom bracket and drives the shock from below.

The dropouts also help distinguish the DH bike from the Range. As for rotors, he’s running 220 mm on the front wheel and 200 mm on the rear with organic brake pads.

Mallet pedals and a Deity saddle with an old-school angle round it out.