9 Bikes That Have Won the Albstadt XC World Cup 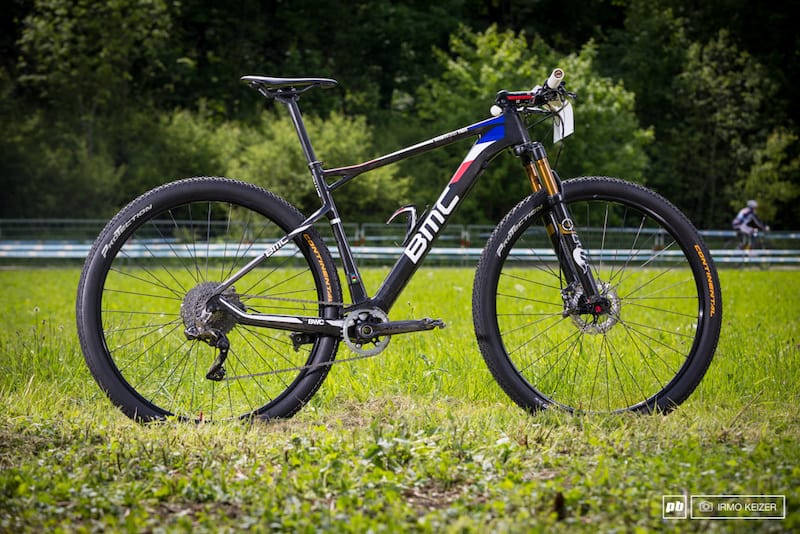 While technical tracks and full suspension bikes have become commonplace in World Cup racing, there’s one venue that sticks to a more old-school style of racing – Albstadt.

The German round of the World Cup series features a course largely consisting of smooth singletrack and wooden features and as a result, it’s a track where hardtails still rule the roost. We’re taking a look over the past six years of racing and only one of the bikes has rear suspension; for the rest of the winners, it’s a hardtail party with bikes from the likes of Scott, Liv, BMC and more. Let’s take a look at them all.

Julien Absalon’s – BMC hardtail
Julien Absalon was a staunch supporter of hardtails throughout his racing career so he was perfectly set up coming into Albstadt in 2014. His BMC hardtail featured a Di2 electronic drivetrain with a lockout on his Fox fork also running electronically using the same battery. [PCAPTIONS]The Di2 system and Fox lockout were activated using the same battery.[/PCAPTION]
More info, here.

Pauline Ferrand Prevot now races mountain bikes full time for Julien Absalon’s team but in 2014 she was more known as a road racer and was coming into the Albstadt World Cup after winning La Fleche Wallone just over a month beforehand. While she could still have raced as a U23, she put the elite field to the swords and ended up 3 minutes clear by the end of the race.

Jolanda Neff’s Stockli Beryll RSC 29er
Jolanda Neff is the only woman to win more than once at Albstadt and she took her first one on the Stockli Beryll hardtail back in 2014. Stockli, known mainly for its skis are a brand that produces its bikes in Germany. The Beryll hardtail was a prototype softail with flexstays designed to help the brand’s athletes at the Rio Olympics and it was joined later in the year by the EB 15 full suspension.

Nino Schurter’s Scott Scale
After two consecutive victories for Julien Absalon, it was time for Nino Schurter to take control at Albstadt. He picked up his first win here in 2015 and went undefeated at the venue until 2019. The wins all came on the Scale hardtail, although it was still in prototype phase in 2016 as you can tell from the camouflage paint. This version had skinnier seat stays, designed to give a bit more rear-end compliance. Although Nino’s frame would stay the same through the years, it did see some significant spec changes from the DT Swiss suspension and Degast tires he was on down the line.

Annika Langvad bucked the trend and won in 2015 on a women’s version of the full suspension Specialized Epic called the Era. The extra squish clearly wasn’t slowing her down as she won the race by around 90 seconds from Jenny Rissveds. Langvad continued on the same setup to great success that season, including picking up the Rainbow Stripes in Nove Mesto.

Nino Schurter’s Scott Scale
We’re skipping ahead to 2018 as we don’t have any pictures of either Nino Schurter’s or Yana Belomoina’s winning bikes from 2017. Nino completed his hat trick of victories in 2018 with another win on the Scott Scale but there was a very significant piece of tech hung off that frame, our first look at the SRAM XX1 Eagle AXS groupset.
The groupset didn’t make the most illustrious start to its racing career as Nino suffered a “mysterious” mechanical in the short track race and was left on the line by the rest of the field but he made it up in the race itself and won the XCO by a comfortable margin.
More info, here

Neff took her second win in Albstadt in 2018, this time racing on the Level frame from Polish Brand Kross. Just a week later she’d have her own prototype drivetrain to shout about as she was one of the select racers who got to test Shimano’s 12-speed XTR in Nove Mesto.

Mathias Fleuckiger’s Thomus Tomcat
Albstadt 2019 was a washout and staying upright was as much of a challenge as putting down the watts. Mathias Fluckiger took his second ever win on his Thomus hardtail equipped with a dropper, which could have been a key factor in staying ahead of Mathieu Van Der Poel in the mud.

Proving it’s not just Nino Schurter who can win at Albstadt on a Scott Scale hardtail, Kate Courtney grabbed her first-ever Elite win last time we were in Albstadt. It was Courtney’s first-ever race for the Swiss brand and she duly rewarded their faith as she kicked off her overall-winning season. Courtney’s bike features some cool customizations including AXS Blips, rainbow details and a custom paint job.