5 Things We Learned from the Val di Fassa EWS 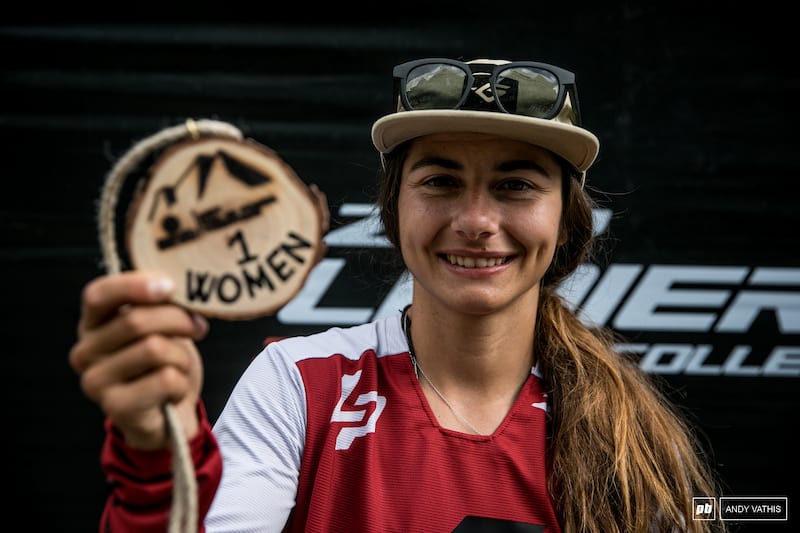 A character-building race for Courdurier
From the outside, it may have looked like Isabeau Courdurier’s win in the first Val di Fassa race was business as usual but in reality it was anything but.

Courdurier’s father tragically passed away in May and she described the following months as “a roller coaster of emotions”. Just before the race in Val di Fassa said: “I am struggling to put it all together. I felt absolutely lost and struggled to get back to my training routine.” She almost pulled out the race entirely but decided to race on. She explained, “I remembered I am not racing to win… everything does not have to be linked with performing and winning. I ride bikes because it makes me happy. It is as simple as that.” It turned out to be a wise decision as she was untouchable in the first race on Wednesday, winning the race and the Queen stage to establish an early lead in the series.

That lead slipped as mistakes and mechanicals marred Courdurier in round 2 but she will still come away from Val di Fassa immensely satisfied with her performance. Following doubts and emotional hardships this was more than a race win, it was a performance of a true champion.

It was the Closest Race in Men’s EWS History

Val di Fassa provided the third men’s race in EWS history that has been decided by less than a second. It was just 0.48 seconds that separated Rude and Moir after 32km of racing across natural, exposed stages with nearly 2,500m of descending. But how does this stack up to the other closest results? Well, the other two of these results came at Les Orres and Northstar in 2019 but the first race this weekend had a smaller margin than even both of those. Coincidentally, Richie Rude has been involved in all three of these with a southern hemisphere rider as his competitor.

With the closest three races in EWS history coming in the past couple of full seasons, it’s clear that EWS racing is becoming tighter and more exciting to watch than ever before.

Fans have been calling out for live-streamed EWS races since the series’ inception and it took a big step towards achieving that on the Pro-only stage on Friday night. With seven camera operators spaced along the final half of the stage, the EWS and its new broadcasting partner GMBN were able to put together a pre-recorded recap of the stage that looked as close to a race stream as the series has ever got.

When Discovery Inc, the owners of the Eurosport TV channels, invested in the EWS in April, they said they would, “begin the journey towards live production.” The video may have only showed the Top 5 men (apparently the weather and disruptions meant they couldn’t film the Top 5 women too) and it may only be one pre-recorded stage on one day of racing but it shows clear intention of where the EWS is headed and we can’t wait to see more.

Riders on Maxxis tyres enjoyed a successful week of racing and that dominance showed when it came to the podiums. In the men’s race in Round 1, the entire Top 3 was on Maxxis rubber however they were on different set ups – Rude was on Assegais front and rear while Moir and Melamed were on an Assegai front and Minion rear.

Moir and Rude won again in the second race for more Maxxis success but this time they were joined on the box by Charlie Murray, who was using Specialized tyres. Maxxis picked up two more podium spots in the women’s field thanks to the relentlessly consistent Morgane Charre. In total, that means that 7 of the possible 12 podium spots were taken by Maxxis riders in an impressive weekend of racing.

The EWS Pit Parties are Wild

After the race wound down on Saturday evening, the pits transformed from a sedate avenue of quietly tinkering mechanics into one of the best pit parties we’ve seen in years. Stand up manual races, bike limbo and Richie Rude ripping tyres off rims on command. It felt like the kind of classic World Cup post-race party we haven’t seen in years.
More of this in mtb please! https://www.pinkbike.com/news/5-things-we-learned-from-the-val-di-fassa-ews.html?trk=rss